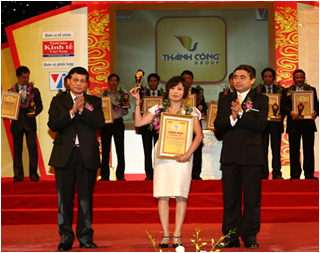 On April 04,2010 at Ha Noi Opera House, Ceremony  Award “Vietnam excellent brand” was held solemnly. TCG with 120 other enterprises honor step to the podium. This is the consecutive 4th time that TCG was recognized in this prestigious award.

As one of the leading enterprises in Vietnam’s textile garment industry with over 30 years experience and hold annual revenue over 1000 billion VND (from 2006), in which 70% of revenue earned from the export market , fiber – fabric – garment products of TCG was confirmed not only the quality in the domestic market but also to many foreign markets, especially in big markets such as America , Japan, Europe …

In 2009, in the integration process, Thanh Cong move to step up cooperation, calling for investment from E-Land Group – One of Top Fashion Retail Group in South Korean. Similarities in traditional trades and business culture has created a positive value in cooperation with business results in 2009 is quite positive: revenue 1126 billion, increased 10% compared to 2008, Profit after tax: 54.3 billion, increased 986% compared to 2008.

TCG won more than 200 enterprises in final approval of Vietnam Excellent Brand 2009. Most of them have stable growth, with total revenue from $ 317.5 trillion VND in 2008 to 416.7 trillion VND in 2009, keeping a stable life for the thousands of officials and employees, contributed to the government budget 60 trillion VND.

Thanh Cong is also one of enterprises which was introduced to participate in “National brand” program. Vietnam Trade Promotion Agency will announce the result on 20th April.

With the slogan “For your success “, the efforts of Thanh Cong impressed consumers, brought true value to investors, officersemployees and contributed to making life better for the environment and community. It is also the most noble titles that Thanh Cong towards.